Our Son, Brother and Friend.

Ben enlisted into the US Air Force right out of high school. For years, he was never really sure what he wanted to do as a career, though he had many talents. He was athletic, doing everything from football and baseball to cross country and golf throughout school, and then taking up snowboarding in his free time, something he often did with his brother, Matthew, and friends.

Though he had a hard time seeing it, he was deeply loved by many people. He never thought he was smart, but he was wise beyond his years, and extremely gifted. When he was younger, he could spend hours building model planes, and went on to build real ones in the Air Force.

He was artistic, with some of his work qualifying for the Wisconsin State Art Show when he was in high school. He was such a kind and gentle soul, that children especially gravitated to.

He always was and would have always been a kid at heart.

Below are what his friends and fellow Airmen had to tell us about Ben, in their own words. 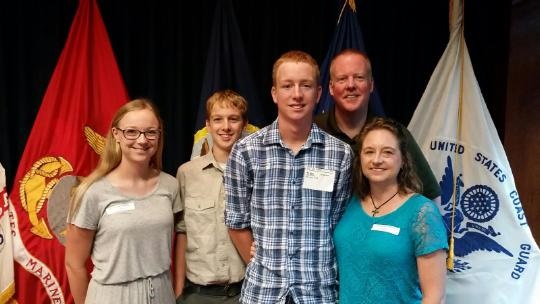 “He was loved by everyone truly, one of the best friends I’ve ever had. You raised a model airman no doubt.”

“He loved you so so much and I hope you know that.”

“He couldn’t stop telling us how excited he was to come home to snowboard with [his brother, Matthew].”

“I don’t think I can stress how much he loved you and your family. Y’all made him so happy.” 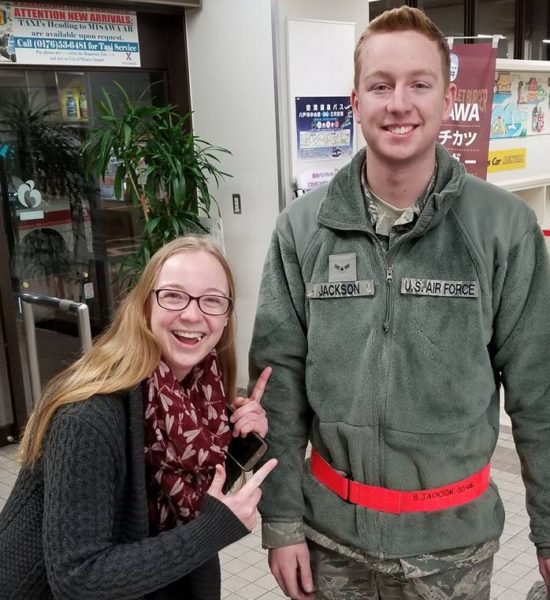 “He always talked about his siblings and parents.”

“You all were so very important to him.”

“He really missed you guys.”

“He was always telling me how much Matthew was progressing in snowboarding.” 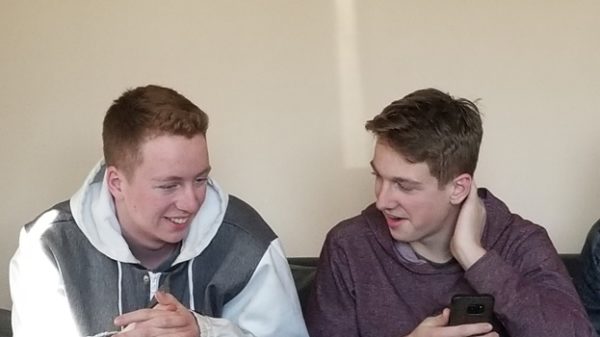 “I had a chair in my office that looked like a therapy chair and he would come in and just talk about y’all right before he went home and how excited he was to go spend time with you guys.”

“He was always excited to tell anyone about you. I swear he had a twinkle in his eye.”

“I remember the night he was going to pick you guys up. He was so excited to leave work and see you. He obviously was so excited he didn’t even change his uniform.” 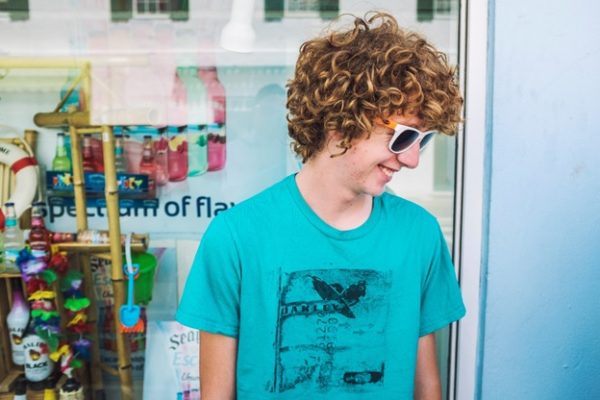 “We called him carrot top.”

“He was such a goofball and there was rarely a day he didn’t smile.”

“Before hitting a jump when boarding he always screamed “IM GUNNA SEND IT!”

“He always made us laugh,”

“I just remember him jumping over me one time snowboarding all I heard was “hey Vanessa duck - I’m gonna send it” I had no idea what he was about to do but I saw him coming my way and almost lost it. I miss that fearlessness and just confidence he had when it came to riding he also tried to teach me how to carve but realized I was a lost cause.” 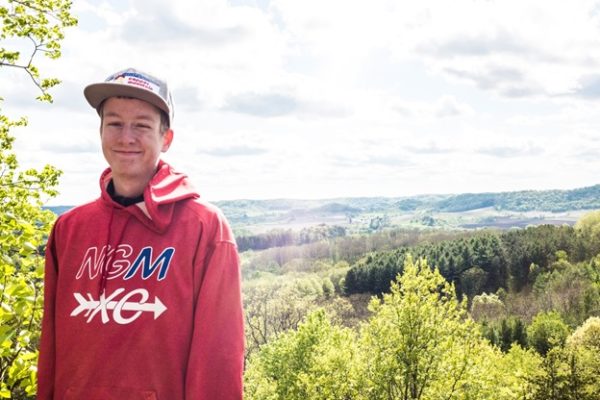 “He always gave you the goofiest smile if you just looked at him.”

“Or he would give you the deer in headlights look lol.” 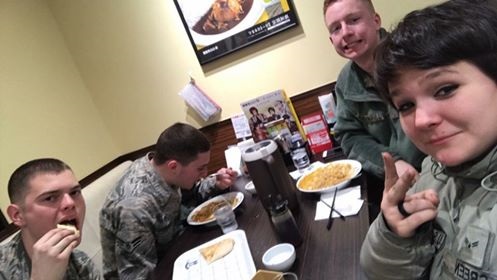 “He could brighten up your day just by looking at you in my opinion.”

“There wasn’t a day he didn’t make me smile.”

“He always would quote vines and that would make me laugh even if I was in a terrible mood.”

“We always made weird car noises.”

“When me and Ben first got to Japan we went to the BX and he found this shirt with little chicks and magnets on it and he used to wear it all the time. It was his chick magnet shirt.” 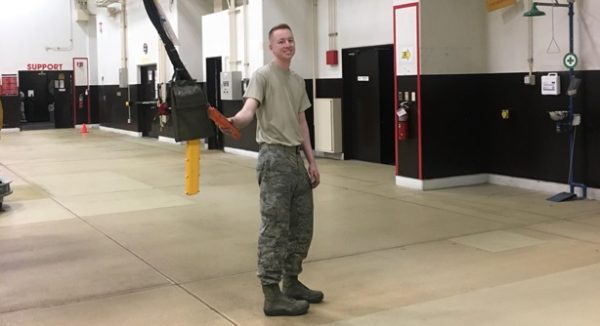 “During the shop Christmas party he volunteered to do the competitive scavenger hunt and was trying his very best to win it for us. The object was to rush to find the item and get back to a chair kind of like musical chairs. Well it was down to the bottom two flights and the last object was to get a commanders coin and silly Ben was going around asking everyone for one but the commander was sitting right there and could of given him one We lost but it was so funny to see him doing that.”

"He was so excited to be up there."

"Anytime I brought my little ones out to a Doc lunch Ben was always their being a kid with them and our oldest adored him so much they laughed and played the whole time. Our last lunch date together was about 3 Tuesday ago at pizza night where Ben had a whole bowl of ranch literally an entire bowl just of ranch for his pizza. We giggled because he took the last of the ranch in the container so he ended up having to share with everyone. He was totally okay with that. You raised one amazing guy."

“Although I did not have the privilege of getting to actually do maintenance and work with Ben constantly, I am very thankful for the time I did get to spend with him at work. Just last Tuesday he was showing me how to do one maintenance job and he was getting a kick out of the fact that I didn’t want to get dirty, so he gave me gloves. He had a heart of gold and seeing him was always just light.” 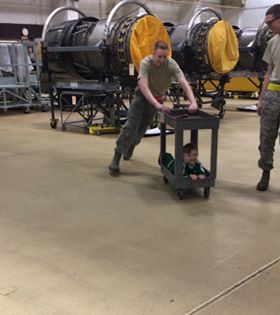 “It was always fun watching him try to teach things to Evan because he would tease him a little and then explain it to him.”

“I was the supply guy before I left. But he taught me how to do safety wire and was always showing me what parts went wear and I would always get it wrong.”

“He looked at me with a “seriously” kind of face and then I thought I broke something and his face was priceless like he was ready to make me feel bad! But he was so sweet and helpful about it like yeah that part just comes off all the time." 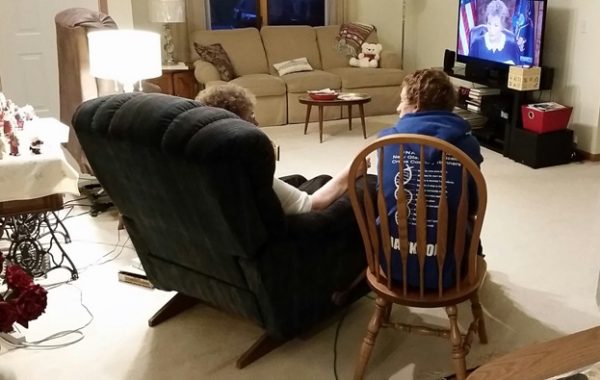 “We hung out almost every day he was always there for me and everyone. He cared so much about people in general and made sure we knew that by showing us. I love that man so much"

“He always tried to get the dock together to do a lunch where we all went to get food one day a week. Sometimes he would try to get us to buy his food too.”

“I really wish I had a heart like his.”

“He was so great and so genuine. He has an extremely beautiful soul.”

“No matter what kind of mood I was in he was always able to put a smile on my face. He was truly loved here.”

“He was always trying to learn something new and make himself better.”

“He was a blessing to everyone who was lucky enough to know him and he’s always going to be with you 🙏🏼.”

“We all really cared about him a lot; he was a great young man.” 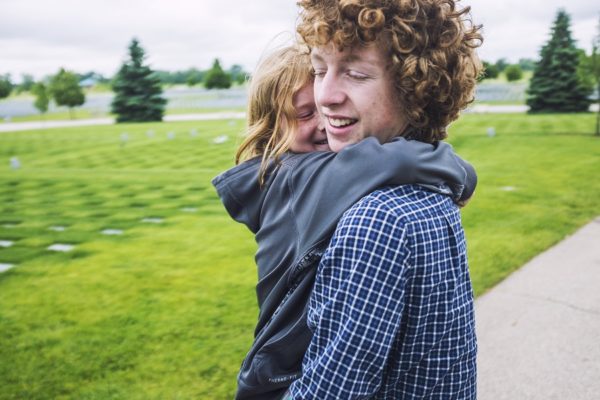 “I believe we all loved him in our own way. He was so great.”

“I’m super grateful for every second I spent with him.”

“Ben was my light through the darkness."

“We were like brothers. We always shared deep conversations and talked about life in general. I can tell you from knowing him in his recent life he was not afraid of anything. He was fearless, truly. He would always tell me this quote. "you miss 100% of the shots you don't take". He always tried making me feel better through rough times, and I did the same for him.”

"Ben always had my back and he was always willing to help me better myself in any way."

"It was truly a blessing to have been able to have him be such a huge part of my life."

“Ben was the best friend anyone could ask for. He was kind, sincere, and always had your back. He pushed you to be better when you doubted yourself.”

“In 7th grade, Ben was one of the main reasons I decided to try baseball for the first time. One time at practice, I asked him to show me how to pitch. I had no idea what was going on, but he stayed patient with me the whole time. I got frustrated because of how poorly I was doing but the fact that he managed to stay chill the entire time blew my mind.”

“I hadn’t ever been snowboarding before and really wanted to learn and Ben offered to teach me. So when we got up the ski lift for the first time, he took me down the easy run and it took about 45 minutes for a run that should have taken about 4-5 minutes max. But I kept falling. He was really a good teacher because he never got mad or asked me to hurry up, he just kept watching me fall and telling me what I was doing wrong. After we got down we went back up and then my second time I made it down without fall and he was so proud of me. That was one of my best moments of high school and of Ben.” 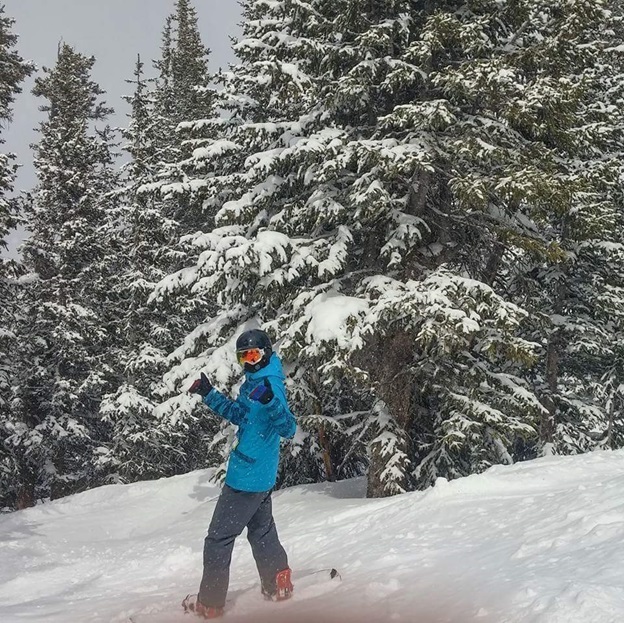