The Ben Jackson Foundation is privileged to introduce Gregory Fischer, a recent recipient of a Travel Award.  Fischer is currently stationed at the Marine Corps Air Station in Yuma, AZ as an E-3 Lance Corporal and part of the 122nd Marine Fighter Attack Squadron (aka the Flying Leathernecks).  Fischer currently works on the F35Bs and is part of a new F-35 “Lightning” Squadron! 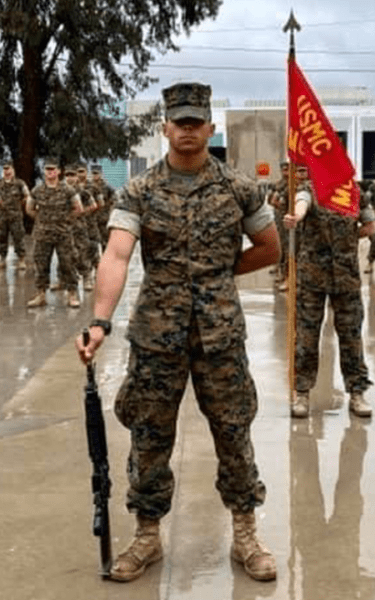 When asked, what Gregory was like as a kid, his father, Greg Fischer, states, “Gregory has always been naturally driven, self-motivated, and he doesn’t just settle. He is quick with a smile and has a big heart.”  A 2018 graduate of DeForest High School, Fischer ran cross-country and played football, but his passion was wrestling, which carried him into college.  Eventually however, Fischer found himself coming to his father one day and saying, “Dad, I’m joining the Marines.”

There was no question which branch of the military Fischer would choose; he comes from a long line of family members who have served in the military, including Greg, who was also a Marine.  Greg recounts attending Parent/Teacher conferences when Fischer was a young boy, and his teacher showing them a picture he had drawn of a fighting Marine.

Fischer’s career in the Marines thus far has included many accolades, including several meritorious promotions, leader shooting scores, and serving as squad leader, even after an 8 week medical leave after breaking both his shins.  Fischer is described as slightly reserved, but driven and serves as a good role model and mentor.  Fischer’s ambitions for the Marines are front lines and eventually a drill instructor position.

Before Fischer left for boot camp, Greg and other family members offered the best advice for a new Marine recruit: Take care of your feet!  Fischer’s mom, Jackeline, along with his brothers and sisters and extended family, wish him the best of luck, are very proud of his perseverance, determination, aptitude and success so far.

We would like to thank Gregory Fischer for his service, and wish him the best of luck in Yuma, and wherever the Marines may take him!