The Ben Jackson Foundation is pleased to introduce Antione McGill, one of our latest Travel Award recipients.  Antione is a 2019 graduate of Bigfoot High School in Walworth WI.  She has enlisted in the U.S. Marine Corps, which she chose because they push you harder physically.

McGill is scheduled to leave for boot camp on June 1.  She will travel to Parris Island, SC for 3 months of boot camp.  Given the uncertain times we are currently in, the beginning of McGill’s military camp experience might be delayed by a 14 day quarantine upon arrival in Parris Island.  Once cleared for boot camp, she is up for the challenge. 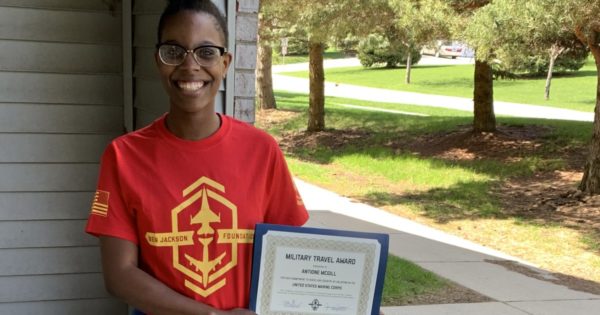 After basic training, McGill is going to be working on becoming a member of the Military Police and plans to make the Marine Corps a career.  When she leaves the Marines, whenever that might be, she envisions a herself in a place like New York City.

McGill feels ready and excited for the life experiences that being a Marine will offer.  Although there is some nervousness, knowing that this will be a change for the better in her life makes the nervousness okay.  Several of her family members have been in the military, which makes her believe that “if they could do it, I can do it”.  Since graduation, she has been preparing both physically and mentally.  Physically, she has been working out, focusing on running, pull ups, and crunches to be ready for basic training.  Mentally, she has been working on getting and staying in the right mindset with a “keep going” attitude.

Her twin sister, Andriunna, has also enlisted in the Marine Corps and is currently in Parris Island.

McGill learned about the Ben Jackson Foundation when Larry Jackson attended a recruit meeting that McGill also attended.  She thinks this is a great foundation and can really help a lot of families.

Thank you for your willingness to serve and good luck!!